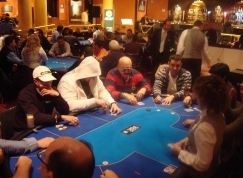 
The Poker High School Tournament in Marbella  began yesterday, Tuesday, January 12th with a waiting list.  A total of 72 players participated in this event that has not stopped growing since its inception in October last year.

Casino Marbella offers a new season of poker and in addition to their weekly Friday tournaments, the Friday Poker Fever with the Azartia League will begin in February with prize tickets for the Cirsa Poker League Tour.