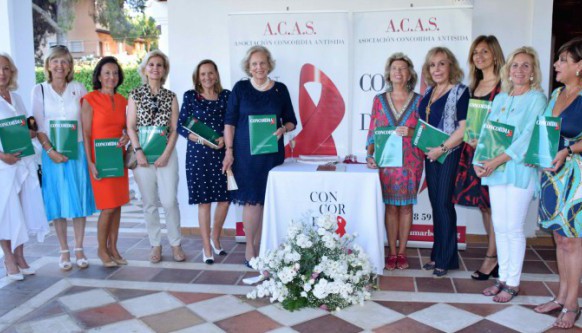 
The Princess Marie Louise of Prusia dedicated a few words of thanks for the support of the Concordia Association, which she presides during the presentation of the 20th Concordia magazine.

The Princess Marie Louise of Prusia, President of Concordia Antisida presented the 20th edition of the magazine of the association last Friday July 7, 2017 at 19.30 in CasaClub Marbella. The president of Concordia thanked, in the course of he cocktail, the disinterested work of the collaborators of this magazine as well as the advertisers that with their contributions help to subsidize the work of the association.

The Princess Maria Luisa of Prusia being interviewed by Helena

Also, Teresa Muñoz de Martín, presented the current memory of Concordia with the aims and objectives, programs and projects, the work of prevention and dissemination of the disease and the social and psychological care that the association currently provides.

A very important note about Concordia was that its director, Teresa Muñoz de Martín, called "to support Concordia economically or, unfortunately, it will disappear in a short period of time because it can not continue to be financed."

The Princess Marie Louise of Prusia, beautiful, elegant ... aristocratic. Great-granddaughter of the last Emperor of Germany and wife of Count Rudi von Schönburg, she has been a solidary in the social circles of Marbella for more than 40 years.

Rudi von Schönburg, better known as Count Rudi, the promoter of the city of Marbella on the international scene, serves as adviser to Marbella Club.

The Concordia Antisida Association was born in 1994 with a vocation of care, given the need to meet the demand of people affected by HIV/AIDS, who for different reasons require specialized care and services.

The Beginnings of Marbella Club (605)