The Global Gift Gala 2014 in Dubai 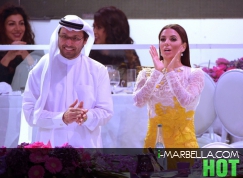 Hosted by talented broadcaster Tom Urqhurt along with Emirati film director Nayla Al Khaja, the evening began with an exclusive performance by R&B singer Tallia Strom.
This was followed by a touching speech from the Global Gift Foundation Founders, Maria Bravo and Alina Peralta, who spoke on all the aspects that have brought this key
event together, followed by a speech by Tariq Al Gurg, Chief Executive Officer of Dubai Cares, speech by Eva Longoria as well as Sunrise K's founders Dalia and Joanna
Dogmoch.

The evening continued with performances by American singer Cody Wise, who performed his hit single It's My Birthday, along with Lebanese Singer and Actor Walid Toufic, and English Singer/ Songwriter Alexandra Burke. This year, the Dubai International Film Festival (DIFF) and Dubai Cares charity gala, in partnership with the Global Gift Gala, raised over $400,000 through generous donations for the exclusive auction led by Christie's auctioneer Hugh Edmeades. Proceeds from the evening went to UAE based philanthropic organisation Dubai Cares, the Eva Longoria Foundation, Sunrise K Foundation, and the Global Gift Foundation.

Whose designs will Eva Longoria and Maria Bravo be wearing at the Global Gift Gala?