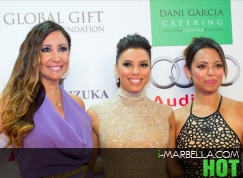 
Global Gift launched a series of events hosted by Honorary Chair Eva Longoria and Co-Chair, Vicente Del Bosque. Following the huge success of last year’s Philanthropic Weekend in Marbella, the much anticipated programme of fundraising events returned for a second year. The Global Gift Gala was held at the Hotel Grand Meliá Don Pepe on the 4th of August, where Eva was accompanied by her boyfriend Ernesto Arguello and other famous celebs such as Shemar Moore, Lara Fabian, Thom Evans, Tallia Storm, Nate James, Sara Pi and Bruce Baps & The Lecheritas

The actress and celebrated philanthropist, who is also Honorary Chair of the organization, was joined at the event by Masters of Ceremony Paloma Lago and Thom Evans.

The Gala that was part of the Philanthropic Weekend raised a total income of €416,000 with proceeds to be shared between The Eva Longoria Foundation, Fundación SOS, Asociación Ser Humano and Global Gift Foundation to help support vulnerable women and children across the world.

Eva Longoria said; “We were delighted to return to Marbella for The Global Gift Gala to the Gran Meliá Resort Don Pepe for an evening of celebration and philanthropy. The generous donations that we received will help make a difference to many women and families in the city of Marbella and across the world”.