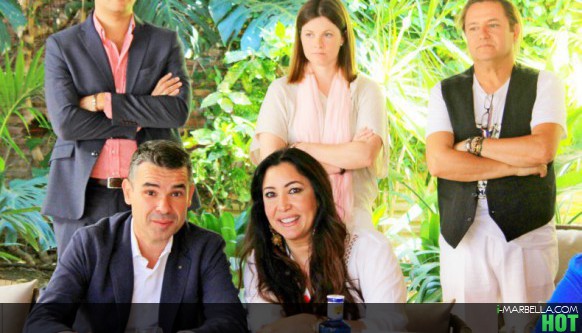 Following the success in Madrid, Paris, and Cannes, Maria Bravo returns home to celebrate the Global Gift Philanthropic weekend for the 5th consecutive year in a city of 5 stars.

On June 21, Maria Bravo has announced the details of the Fifth Edition of the Philanthropic weekend that will be held on the 16th and 17th of July in the city of Marbella.

Maria has presented the activities that will take place during the weekend in order to fundraise for the following foundations: Mensajeros de la Paz, The Eva Longoria Foundation, and the Global Gift Foundation.

On Saturday, the 16th of July, the philanthropic entourage returns to Olivia Valere to celebrate its Global Gift Party -- La Soirée Edition, where all guests will enjoy a dinner prepared by the Babilonia restaurant fused with live performances of the best Spanish flamenco performed by El Carpeta, Janelle Fischer, and Tony Méndez among others.

On the morning of the 17th, the Global Gift Foundation will present Casa Global Gift to its main international donors who will be travelling to Marbella for the occasion. The donors will have the possibility first hand to meet the little ones who will be benefited from this centre as well as seeing the facilities that will be refurbished in the near future.

All local companies involved in the Casa Global Gift project will have the opportunity to make their donation in person to the ambassador and Honorary Chair of the Global Gift Gala -- Eva Longoria. Together with Eva, Amaury Nolasco (Sucre de Prison Break) will also be present as well as a number of national and international celebrities who will also be attending this memorable day.

To bring the weekend to a close, the Global Gift Gala will take place at the Gran Meliá Don Pepe on the night of the 17th of July. For this fifth edition, Ms Bravo will be accompanied by Amaury Nolasco and Belinda Washington as masters of ceremony.

Pitingo, little Adrian Martin, India Martinez, and Chenoa will leave their magic through their voices and music. The Gala guests will enjoy a Michelin dinner, prepared by Diego Gallegos (SOLLO), Oscar Velasco (SANTCELONI), Victor Carracedo (GRAN MELIA DON PEPE), and Jean Phillippe Darcis. During the evening, there will be a presentation of the Global Gift Awards, a live auction, and the official presentation of the first edition of the new philanthropic magazine named Global Gift Magazine.

During these five years, thanks to Global Gift Gala names such as Eva Longoria Baston, Terrence Howard, Amaury Nolasco, Shemar Moore, Taboo, Lara Fabian, Eva La Rue, Deepak Chopra, Pixie Lott, Olivier Chesire, Tallia Storm, and Patsy Palmer, among others have come and talked about Marbella. At national level, people of influence such as Vicente del Bosque, Bertín Osborne, Isabel Gemio, Jordi Mollá, and more than a hundred celebrities have enjoyed a night of philanthropy in the city of Marbella.

Maria stated: “We are proud to celebrate the Global Gift Gala every year in my city, and it is a great pleasure to receive the warmth of people, sponsors and collaborators as well as the affection of the media who make it possible for this event to be a success”.
The gala has already confirmed the attendance of over 250 guests, therefore there is only a dozen tickets available for sale.

Tickets: 500€ for platinum tickets and 1,000€ for VIP tickets. Please make your reservation at rsvp@globalgiftfoundation.org.

Morevorer, the platform offers solutions for companies offering alternative advertising in a solidarity pack format whose returns on advertising sponsorships reach the ratio of 8:1.

All money raised during the evening will go to three causes: 1. Casa Global Gift: It is the first major project of the Global Gift Foundation, a multifunctional centre for children with rare or chronic diseases. The centre is formed by five local associations from Marbella.

Casa Global Gift is a project supported by the Town Hall and as a symbol of the city. As the beginning of the first phase of reconstruction of this space donated, Maria Bravo has revealed that the Godmather of the first Casa Global Gift, will be the actress Eva Longoria who will be at the Casa Global Gift for the official presentation on the 17th of July together with the members of the 5 local associations and other surprises that will come as international support for the cause.

3. The Eva Longoria Foundation: will be the third beneficiary foundation, which helps Latinas to form a better future for themselves and their families through education and entrepreneurship.