Inside The Global Gift Gala Marbella with Celebrities 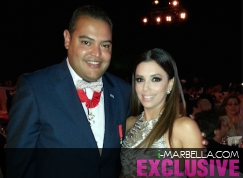 
For the third consecutive year, the Global Gift Gala with the stunning Eva Longoria was celebrated at Gran Melia Don Pepe in Marbella on the 20th of July. This five star hotel on the front line of the beach has been the home to this starlight gala celebrated annually in July. The TV presenter Felix Ramos had the chance to be amongst the celebrities that night.