Inside the Eva Longoria Global Gift Gala with Annika Urm 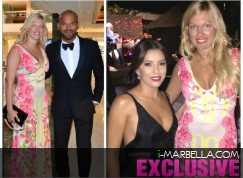 
The Global Gift Foundation celebrated its 4th edition of The Global Gift Gala, turning Marbella into the city host of the main non-profitable summer event on the Costa del Sol. The Gran Meliá Don Pepe Hotel housed the event.

A special charity auction was held at the Gala, whereas the most expensive item turned out to be a first-class trip for four to see the behind the scenes of a new TV-series Hot & Bothered (previously known as Telenovela) as well as a dinner and a time-out in Los-Angeles with Eva Longoria. The price of the two items amounted at 18,000 EUR.

The auction also saw celebrity signatures (e.g., Jane Fonda, Eva Longoria), jewellery, and pieces of art. All of the funds were directed for charity needs. Equally important, funds for charity needs in Marbella were raised.

The funds raised will be divided into the following organisations: The Eva Longoria Foundation, Fundación Bertín Osborne, and The Global Gift Foundation.

The performers of the night included Descemer Bueno and Taboo from the Black Eyed Peas.

The Eva Longoria Global Gift Gala in Marbella on July 5, 2015