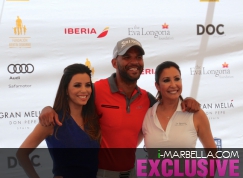 
For the second consecutive year, Global Gift held a celebrity golf tournament in La Quinta Golf & Country Club on the 19th of July.

The Global Gift Philanthropic weekend with Eva Longoria is happening right now in sunny Marbella. One event during the weekend was the Celebrity Golf Tournament in La Quinta Golf Club. Among the celebrities were Eva Longoria, Terrence Howard, Amaury Nolasco, Angeles Munoz, Manolo Santana, Maria Bravo, Oscar Higares and many others.

Among the 92 players the following awards were presented:

There wer also prrizes for closest ball and that went to AZZAM ELIAS, Longest Female Drive to DOLORES CRESPO and longest drive for men was givent to STEFAN TJELLANDER. The host was EVA LONGORIA and the tennis champion MANOLO SANTANA.

At the end of the awards ceremony there was a special award that was presented by The Group Marketing Director Editorial Unit, TANIA MARTINEZ. And the famous philanthropist trophy went to AMAURY NOLASCO. The Puerto Rican actor received the award for its support and solidarity causes Global Gift Foundation, always giving unselfishly his time and image to help the needy. The sports fan actively participated in the tournament and was thrilled by the award provided by the director, Eva Longoria and Maria Bravo.

Tomorrow all the celebrities will also be attending the Global Gift Gala in Gran Melia Don Pepe. Eva Longoria has been named the gala's Honorary Chair for the event, which will also be held at ten other locations around the world and The Eva Longoria Foundation is among one of the groups that will benefit from the upcoming gala, including the Global Gift Foundation and the Fundacion Bertin Osborne.

The gala helps fund the Global Gift Foundation, a charitable organization that provides money to groups that aim to assist women and children, as well as contributing essentials such as food and education to people in need.

Terrence Howard and his wife Miranda