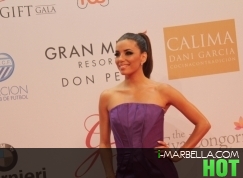 Maria Bravo, Eva Longoria and Alina Peralta
The evening was organized by Manda events, with Maria Bravo and Alina Peralta and a large team of professionals who created a visually and gastronomically spectacular evening, thanks to the selfless chefs from Marbella, Dani Garcia and Diego del Río. And thanks to the performances of Diana Navarro, Pastora Soler, Chenoa and Diego Amador, who was accompanied during his performance by American actor and singer, Terrence Howard.

Amaury Nolasco with his girlfriend

Sylvie Van der Vaart
The guests also had the chance to participate in different auctions led by David Meca and there were brilliant things on offer: a painting by Antonio Montiel, a weekend at a spa, a range of beauty products from Lorena Morlote, a trip abroad with the Malaga Football Club, a deluxe jewellery package by Gómez & Molina, a five day retreat with Deepak Chopra, a shopping trip in London with Eva Longoria including tickets for the Nobel Gift Gala in London and two works of art by Pedro Peña, amongst other things.

María Pineda and the designer, Carolina Toca
Other companies also collaborated so that all the money collected, both at the dinner and the auction and raffle will be given to children and families of the three foundations.

Some of these brands were: