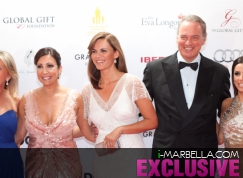 
For the third consecutive year, the Global Gift Gala with the stunning Eva Longoria was celebrated at Gran Melia Don Pepe in Marbella on the 20th of July. This five star hotel on the front line of the beach has been the home to this starlight gala celebrated annually in July.

Always the philanthropist, Longoria has her own charities and organizations that are very close to her heart. Longoria established “The Eva Longoria Foundation” (www.evalongoriafoundation.com) in 2010, which helps Latinas build better futures for themselves and their families through education and entrepreneurship. Additionally, she serves as the national spokesperson for PADRES Contra El Cancer (Parents Against Cancer) (www.iamhope.com), a nonprofit organization committed to improving the quality of life for Latino children with cancer and their families. Longoria also co-founded the non-profit organization “Eva’s Heroes” (www.EvasHeroes.org), dedicated to enriching the lives of those with developmental challenges by providing an inclusive setting built on the four tenets of interact, grow, learn, and love. She also co-founded, launched, and participated in the first ever celebrity Twitter auction called “TwitChange” in which celebrities auction off “tweets” and “mentions” for Haiti earthquake victims.

Manolo Santana with his wife Claudia

Kendji (winner of the last French edition of The Voice)