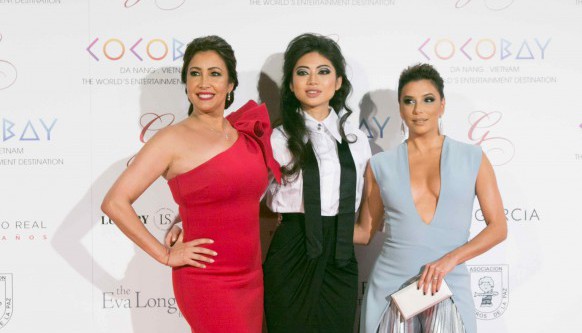 Founder and host Maria Bravo gathered personalities and influencers from around the world of theatre, music, sport and philanthropy in a gala full of emotion.

The actress Eva Longoria Bastón, the honorary ambassador of the foundation, was once again the unconditional support of Maria and her project in an evening where she shared the stage and hilarious moments with the comedy duo Los Morancos who presented the gala.

The gala menu designed by two Michelin star chef Ramón Freixa, who wished to join the solidarity cause by supporting the event and providing his services to more than 200 guests.

The main gala sponsor was Vietnamese businesswoman Coco Tran, who through her company Cocobay, made a financial contribution of € 75,000 to cover the costs of the party.

The Global Gift Foundation (GGF) held the second edition of 'The Global Gift Gala of Madrid', presented by Cocobay on Tuesday 4th April last night in the emblematic stage of the Royal Theater. The event consecrated as one of the most prestigious philanthropic events of the capital bringing together important personalities from the world of national and international culture & art. Solidarity and glamour were united in a ceremony presented by comedy duo Los Morancos with the gastronomic legacy of chef Ramón Freixa.

"I am happy to return to Madrid after the great welcome we had last year, accompanied again by so many good friends who we thank for their great support enabling us to continue to communicate hope," said Maria Bravo, co-founder of the Foundation and Host of Honor of the Gala. She also thanked Eva Longoria, one of the great stars of the night as well as an honorary ambassador of the foundation & friend, for supporting the cause.

The actress declared herself an "unconditional of the great work of the Foundation in Spain and the world. It is global, and it is an honour for me to be part of this great team, which year after year, does its best to raise funds to improve the lives of children, women and families at risk of exclusion.”

Maria Bravo was also "very grateful to the support provided by the huge list of collaborators and sponsors, who make it possible to celebrate this event. Everything is done with love, especially today by this great woman, Coco Tran." In this edition, the Vietnamese entrepreneur, alma mater of the Cocobay project located in the city of Da Nang in Vietnam. Coco Tran will be hosting 'The Global Gift Gala' in Vietnam in 2018, has aligned herself to Eva & Maria thanks to her business relationship with Cristiano Ronaldo, one of the winners of the evening in Madrid. Coco Tran, through her enterprise Cocobay, made an economic contribution of € 75,000 for the work of Global Gift Foundation.

The  Global  Gift awards recognise the  social commitment  of personalities  and entities. The Royal Theater's social program received 'The Global Gift Our Heroes Award' for its initiative within the Teatro Real Social Hall, whose purpose is to motivate and develop children's capacities through the collective practice of music, in addition to arousing curiosity and perception of the artistic world. More than one hundred minors participate in orchestral grouping and a choir.

Among the best numbers this year, was a special weekend in the Villa Infinity in Ibiza, property of the SARM Family Office, one of the best villas that exist in the island won by the Brazilian player Julio Baptista who outbid the rest of guests.

You can make a donation by sending GLOBAL to 28011 Thank you so much for your support.