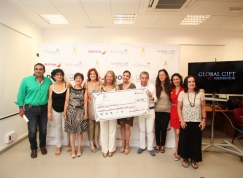 The mayor of Marbella, Ángeles Muñoz, was in the Center for Social Services San Pedro Alcántara 8 August to participate in delivering the money, that was raised during the Philanthropic Weekend, to the local associations.

She highlighted the great work that has been done by the Global Gift Foundation, which has led to raising €164.385, of which €54.795 have been allocated to five local associations. The ceremony was also attended by the organizer of the event, Maria Bravo, Manolo Santana and association representatives of Cudeca, Sampedreña, Felicita Tamm, Parkinson Sol and Autism Angel Riviere.

Finally, Councillor for Social Welfare, Manuel Cardenas, recalled the agreement signed by the City Council in 2012 in which he stated that all charity events in Marbella will give their proceeds to associations and groups in the municipality.