Eva Longoria is in Marbella! 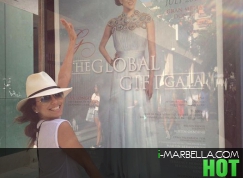 
The beautiful actress and philanthropist, Eva Longoria, is currently in Marbella.

Eva Longoria is in Marbella for the Annual Global Gift Philanthropic Weekend to raise money for charity. She attended a cocktail party in Ocean Club, a charity golf tournament in La Quinta Golf Club and will be present tomorrow in the main event, Global Gift Gala in Gran Melia Don Pepe Hotel. But she also has been enjoying a bit of Marbella - eating paella in the beach with celebrity friends like Terrence Howard and Amaury Nolasco and of course the Global Gift Foundation founder Maria Bravo was present. Also Eva's boyfriend Jose Antonio Baston is currently in Marbella.

Eva Jacqueline Longoria, (born March 15, 1975) is an American television and film actress. She has received two Screen Actors Guild Awards and was nominated for a Golden Globe Award.

Longoria is known for her roles as Isabella Braña on the CBS soap opera The Young and the Restless from 2001 to 2003, and as Gabrielle Solis on the ABC television series Desperate Housewives. For her work on Desperate Housewives, she received a Golden Globe Award nomination. She has also starred in films such as Harsh Times (2005), The Sentinel (2006), and Over Her Dead Body (2008).

Have you seen Eva Longoria in Marbella?

More information about her Foundation and Global Gift Foundation here: