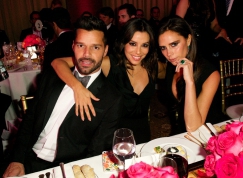 Attendees of the evening included: international fashion designer and Goodwill Ambassador for the UN’S UNAIDS campaign Victoria Beckham, who was awarded the Global Gift Philanthropeneur Award for her dedication towards charitable work through her success as an Entrepreneur; Latin star and UNICEF ambassador Ricky Martin, who acted as co-chair for the evening; and pop sensations Nicole Scherzinger and Alexandra Burke among others.

The evening also recognised The Madonna Lilly Charity Foundation with the Our Heroes Award for its endless work with children suffering from rare diseases. In addition, CEO of the Diana Awards, Tesse Ojo, was honoured with the Global Gift Excellence Award – a prestigious award that endeavours to appreciate and celebrate the work young people make to society – especially those who are young ambassadors, young leaders, young humanitarians, fund raisers, environmental campaigners and those who inspire others, as did Diana, Princess of Wales.

The evening, which was supported by luxury watch sponsor, Frederique Constant, Helmer, Delta Airlines which featured a champagne reception by Nicolas Feuillate, gala dinner; charity auction conducted by Lord Archer; and live performances from pop sensation Alexandra Burke, Britain's Got Talent finalist Asanda, and the evening closed with a special performance by Reyes Heritage who was later joined by legendary singer Nicolas Reyes and surprise guest Ricky Martin to sing Maria. In addition guests were treated to an after-party sponsored by Tia Maria.

The evening raised over a staggering £300,000, which will go onto benefit The Eva Longoria Foundation – helping women and children in the Latino community through education and entrepreneurship; the Ricky Martin Foundation, whose mission is to stop human trafficking in minors; and The Global Gift Foundation which supports vulnerable women and children across the globe. In particular this year The Global Gift Foundation will be helping the city of Malaga, declared by UNICEF just last week the poorest city in Europe, where hundreds of children are starving daily.

During the evening founders, Maria Bravo and Alina Peralta paid special tribute to hosting the gala in London for the last five years. Global Gift Foundation has donated hundreds of thousands of pounds to 10 fiscally responsible foundations. These funds have been used to change the lives of hundreds of women, children and families, being used over a broad range of projects helping causes such as, cancer treatment for children in the UK, emergency aid to the Philippines, life changing operations for disabled children in the UK and other European Countries, microloans for women in need of help, and many more.

In addition, during the evening The Global Gift Foundation announced a partnership with Pretty Ballerinas shoes, who has designed a limited edition shoe for the foundation that will go on sale in its 18 stores across the world, with all proceeds going direct to their causes.

Eva Longoria said: "I would like to thank everyone for their generous donations tonight; we raised an impressive amount of money that will go on to support the important work our foundations do. It was also a great pleasure to present my dear friend Victoria Beckham with the Global Gift Philanthropeneur Award for her exceptional charitable work".

Victoria Beckham said: "It has been a great honour to be recognised for my charitable work this evening and particularly to support my good friend Eva. The work she carries out with her foundations is truly admirable and I am delighted the evening raised an astounding amount for such worthy causes".