Estonian eID card: the most advanced e-ID in the world, Estonia, August 2017 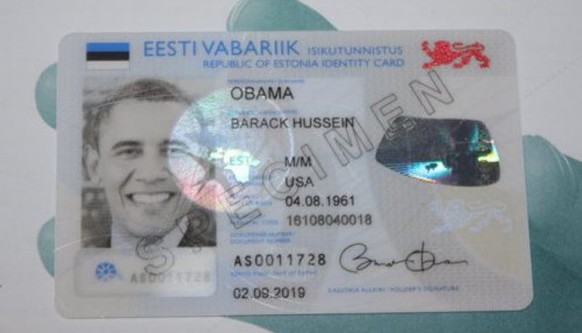 A specimen of Estonian eID card, presented to former US president, Barack Obama, in 2014 Source: e-Estonia


Estonia has the most advanced ID card in the world and they are still moving forward to improve it.

Estonia is moving with technology and so far they have the most advanced eID card system in the world. Currently, it works as the basis for all of the digital services that are available in the country. It is a highly sophisticated digital access card for all of Estonia’s secure e-services. The chip on the card contains embedded files which, using 2,048-bit public key encryption, enable it to be used as definitive proof of identity in an electronic environment.

An example of how it looks the Estonian eID: the most advanced one in the world.

The Estonians use it as a national health insurance card, as proof of identification when logging into bank accounts from a home computer, for digital signatures, online voting, accessing government databases to check medical records, filing taxes and picking up e-prescriptions. According to the statistics, over 98% of bank transactions are completed and 98% of prescriptions are prescribed online. The eID card also makes life easier when it comes to tax declarations and 98% of those are conducted online.

With a card with this level of technology and security, the life is easier for the people living in Estonia. This because, since 2014, it allows also non-Estonian-nationals to use the e-services.

But the Estonian government keeps working to improve the security on the cards and since people are moving to the mobile world, they need to catch up with technology.

To enable eID cards in a smart device context, special card readers are currently needed, such as mini-USB and Bluetooth, but the near-field communication (NFC) option is in the works. “NFC solution is still in the planning phase because the current eID cards do not possess NFC interface. It has been rather challenging to maintain strong security standards while adding NFC interface to our national identity cards. However, we have already succeeded in the pilot project. NFC-capable eID cards will be issued starting late 2018 or early 2019. A very natural follow-up will be the integration of NFC capable eID cards to both Android and iOS phones,” Margus Arm disclosed. Arm is the eID domain manager at RIA, Information System Authority (RIA).

Paris Hilton to visit Mirage Marbella on her European tour Gold Rush, this 12th of August of 2017