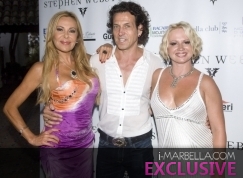 
Stephen Webster, jeweller to the stars hosted an exclusive party in Villa del Mar at the Marbella Club Hotel, with the legendary Bryan Ferry from Roxy Music fame headlining the entertainment.

Stephen Webster hosted a private party to celebrate their first year anniversary in Puerto Banus. The party was held in Villa del Mar in the Marbella Club Hotel with over 200 special guests in attendance.

A special edition Mini with Stephen's Gothic logos, supplied by Guarnieri was on display for all the guests to wonder over, the Mini, a one off, is for sale to anyone who wants to own a unique motor car

After the Just Cavalli and Gian Franco Ferre fashion show, guests enjoyed Bryan Ferry's exclusive performance where they could dance to the rhythms of hits like  "More than this" and many others.

Famous actress Ana Obregón was one of the attendants, looking  fabulous in her Blue Marine dress. She also declared that Stephen Webster´s collection is truly amazing.

Serpents, flying fish, bat moths - Stephen Webster’s jewellery offers a selection of different pieces, including a silver collection. A favorite among celebrities like Christina Aguilera and Madonna, this London-based designer is known for his edgy, unique designs that blend glamour and goth, dark and light.