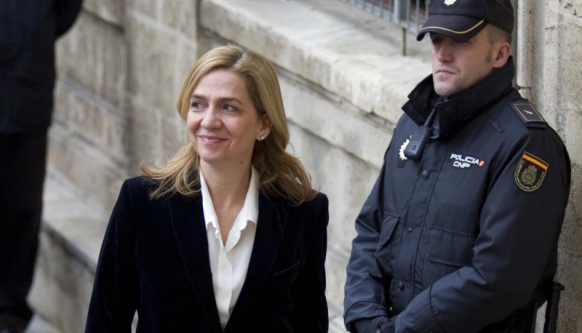 The first week in January is a big one for the Spanish royal family. Each Epiphany, or Día de los Reyes, since 1782, the monarch and his family have dressed up in their military finery as the great and the good make their way to Madrid's royal palace for a grand military parade.

This year there was one notable absentee. Cristina, the "Infanta" and King Felipe's 50-year-old sister, was not invited to the palace.

Instead, she was at her home in Geneva where she has been living since 2013 and no doubt preparing for her trial, which begins on Monday in Majorca. When she appears in the dock to answer lawyers' questions, she will become the first Spanish royal ever to go on trial charged with a criminal act.

The fall from grace of the sixth in line to the Spanish throne has been breathtaking. She stands accused of tax fraud, along with her husband, Iñaki Urdangarin, a former Olympic handball player, and several others. If convicted, Infanta Cristina faces up to three years in prison. Her husband, who is additionally charged with more serious offences, faces the prospect of 19 years behind bars if found guilty. They will both plead not guilty.

At one time, before Felipe gave up bachelorhood and married the forever photographed Queen Letizia, the Infanta and her husband were Spain’s golden couple.

They met at the Atlanta Olympics in 1996, where Mr Urdangarin was a competitor, coming home with a bronze medal; Cristina was an ambassador for the Spanish team.

Married in 1997, the couple has four children and were granted the grand titles of the Duke and Duchess of Palma de Mallorca.

Mr Urdangarin was first investigated over the alleged diverting of funds from a non-profit, the Nóos institute, to his own accounts in 2011.

The accusations hit Spain hard and in his Christmas address that year, the then king, Juan Carlos, Cristina's father, said "justice is the same for everyone".