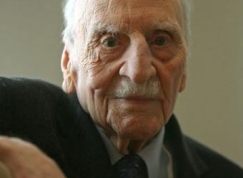 Ayala returned from exile in 1980

The Spanish Literary world lost one of its greatest writers on Tuesday with the death of Francisco Ayala. The 103 – year- old author, born in Granada, wrote masterpieces such as The Lamb’s Head and Death as a way of life. Ayala was the last surviving link to the celebrated “Generation of 27”, a collective of Spanish poets and intellectual . Ayala was a noted scholar, sociologist and thinker who went into exile during the Civil War and did not return until 1980, five years after the death of Franco. He had recently been suffering from bronchitis “His mind was still lucid, but his body could take no more” said poet Luis Garcia Montero, who lead the celebrations for Ayala’s centenary. Ayala, who won both the Prince of Asturias Award and the Cervantes Prize, put down his long life to “honey and whisky”