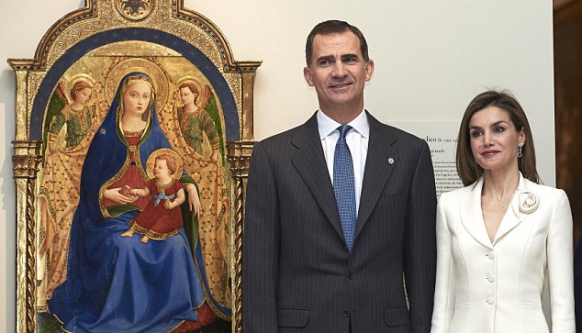 She's a work of art! Queen Letizia of Spain looks elegant in an ivory skirt suit as she visits the Prado Museum in Madrid with her husband King Felipe VI.

Queen Letizia proved why she's one of the world's best dressed women today as she stepped out in an elegant ivory suit.

The 43-year-old Spanish monarch chose the stylish ensemble to meet with the Board of Patronage at the Prado Museum in Madrid alongside her husband King Felipe VI.

Before business got under way, the royal pair were spotted chatting to a group of excited school children who had waited outside of the establishment to greet them.

Clearly making an effort for her day of engagements, Letizia donned a chic off-white blazer that nipped in at her slender waist and had a rose emblem on the lapel.

This sophisticated jacket was paired with a matching knee-length pencil skirt and a pair of burgundy pointed high-heels.

Letting her natural beauty shine through, her make-up was kept simple save for a slick of pink lip gloss and a touch of mascara.

Letizia -- who is mother to Leonor, Princess of Asturias, 10, and eight-year-old Infanta Sofía of Spain -- tucked her glossy brunette hair behind her ears and appeared to be sporting a few blonde highlights.

Upon arrival the pair stood in the gallery's great hall and representatives from the organisation lined up to greet them.

Patrons first shook hands with Felipe before moving on to welcome Letizia.

The group then stood together for a photograph with the royal couple taking centre stage.
After admiring some of the museum's artwork, the team got down to business with their meeting.

Seated beside one another, Felipe and Letizia were spotted reading through the agenda and making notes.

Before their important conference, Felipe and Letizia brightened up the morning of a class of merry school children.

Hiding her ivory skirt suit under a formal bright red coat, Letizia was all smiles as she chatted to the youngsters in the sunshine.

The group crowded round the couple, eager to get a close-up glimpse of their king and queen before they made their way inside the hall.

Felipe gave the crowd a cheery wave before heading off on his way.

Meanwhile, last week, Letizia gave royal style fans a little sense of déjà vu as she stepped out in a familiar regal rouge outfit to visit the Royal Palace in Madrid.

The thrifty royal opted for her old favourite Felipe Varela skirt suit for the fourth time as she greeted vice president Soraya Saenz de Santamaria in the capital on February 10.

She first wore the two-piece, which is thought to have cost around £679, on an official visit to New York in 2009.

She sported the outfit for the second time more than a year ago when visiting Casa dos Marcos in Portugal and then in November during a day of engagements in Madrid.

Queen Letizia Wears the One Outfit You Need