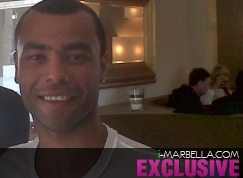 An extremely windy but sunny day in Marbella, where La Sala has hosted a lunch & drink cocktail after an amateur Golf Tournament which had to be called off at the 6th hole due to the weather conditions!

It is believed that Ashley Cole has been learning Spanish and decided that Marbella was the perfect location since its one of the most International places in Europe.