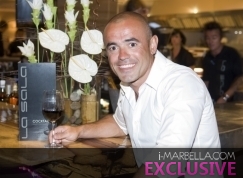 
i-marbella.com caught up with Republic of Ireland and Birmingham City captain Stephen Carr at La Sala

How long have have you been coming to Marbella?

I’ve been coming here for 10 years on and off.

Do you have a house down here?

I’ve got an apartment but I usually stay at hotels because we come down with the kids.

It’s easier sometimes Because you don’t have to clear up after them?

You are one of the partners behind La Sala. How did you get involved?

This is the first time that you’ve seen La Sala since it opened. What do you think?

This is the first time that I’ve seen the club, which is a bit embarrasing really, but it’s just the way that it all worked out as I hadn’t had the chance to see it before. But I’m very excited and I’m sure that we’ll do well I got sent loads of photos but it doesn’t describe it, it looks absolutely cool in there!

How often do you think that you will be able to be here?

I’ll come out when I can. Obviously with the international breaks there will be opportinites to come over for a few days This month there is another international so I’ll be out for a few days, which will be great. It’s a nice little place to have and somewhere to come with the kids The location is pretty good as well... Oh you couldnt get anywher nearer the Port. Rob had explained where it was but I didnt really know where it was. I’ve been by theis area a lot, but we are right next to the Port – you go down the road and you are straight in there. So we are going to have a lot of people coming and going.

Do your teammates know about La Sala yet?

I kept it quite quiet, but I’m letting them all know about it now! And we’ll get as many in as possible! Marbella is a popular destination for footballers… A lot of the lads come out to Marbella and there are a lot of different places to go, but it’s the sort of place you can come to at anytime. And with this and Buddha Beach in the summer its going to be a good combination.

How has the start of the season been for Birmingham?

It’s been an OK start to the season. It’s going all right and the main thing is to stay up again this season.

So will La Sala be the start of a new career for you and a chain of restaurants?