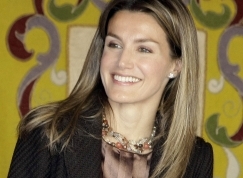 
On Tuesday, Crown Princess Letizia made her first official visit to the Castille region of Spain to inaugurate the restored Zamora Castle.

Letizia unveiled a plaque to commemorate the restoration of Zamora. It took four years and 7.6 million Euros to salvage the castle. In the process, archaelogical pieces from the Bronze Age were discovered, helping researchers better understand the development of Castille.

The Crown Princess was given a tour of the medieval fortress, which has breath-taking views of the area. Among the crowds were several groups dressed in local costumes.

Letizia also attended the opening of a European conference at Madrid’s San Pablo University. The conference, which drew about 120 researchers from Spain and throughout Europe, questioned whether modern technology will or will not harm children’s development.