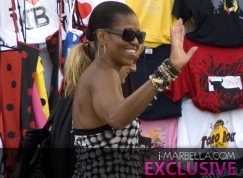 
First Lady Michelle Obama brought the Old Town of Marbella to a halt this evening.

Onlookers and shopkeepers alike were treated to the full didplay of CIA security measures as they shut off the streets to allow Michelle full freedom to window shop in this most picturesque of Spanish Old Quarters.

This however didn't deter i-marbella who as always brings you the hottest stories first.

The battalion (it can only be described as this) then sauntered to the exclusive restaurante Buenaventura situated by the Castle walls and the Iglesia Incarnation.

i-marbella have also gleaned the information that the American visitors will today take the two hour drive to the famous City of Granada, where they will no doubt visit the magnificent Alhambra Palace

More no doubt later as the story unfolds.