Yanela Brooks made it to the second round on "The Voice" 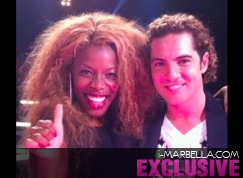 
La Voz is based on the American reality talent show The Voice that premiered on April 26, 2011, on the NBC television network. The Cuban origin singer Yanela Brooks (31), who now lives in Marbella, participated in the TV show singing "Natural Woman" and made it to the next round!

Yanela sang the hit 'Natural Woman' by Aretha Franklin, playing the piano live. Her performance two of the 'coaches' , Melendi and David Bisbal. And Yanela chose Bisbal as her coach! Read the interview and watch the performance and comments of the judges below!


1. Why did you go to the show?
Because The voice is a great international program and they want to find not only the best voice, but also the best artist, and then that's exactly the opportunity that I've been waiting for, to share my show with people in the world.


2. What happened on the show?
Everything was like a dream, perfect and magical.


3. What will happen next?
I don´t know because in future nothing is certain, but i will continue working very hard to keep me in the right way in the show business world.


4. What did you think about the comments of the judges?
They were fantastic and so kind in their comments to me, specially Melendi because he sings a very different style that mine.


5. What is most important to you as a singer?
...The energy, versatility and creativity, i always have something different to show to my audience.


Have a look at the video below of the judges commets: