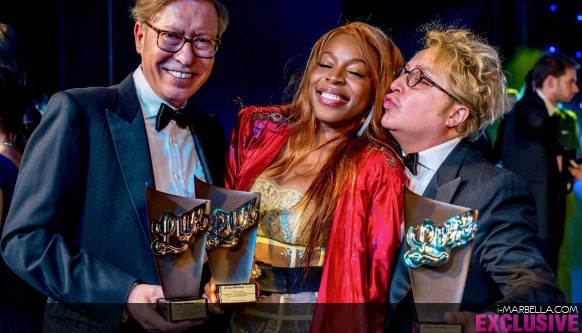 
The Spain Luxury Advertising Awards 5th edition took place on Friday 15 of December this 2017, at Palacio De Congresos De Marbella, Bringing together top celebrities in a night of charity and recognition. There, the fabulous authors of the world of fashion, Victorio & Lucchino fell in love with another winner, our Cuban-Marbella Star Yanela Brooks, it seems that in the future they will collaborate a fashion-music show together.

Yanela Brooks, our Cuba-Marbella Diva was awarded the most elegant singer by the Spanish Radio Academy during this night and opened up her heart when receiving this award showing how she keeps in mind her beginnings and thanks to all those who never stop to support her on the trajectory of her career.

Humble, with a shining smile on her face she thanks, Maria Cansino and the town of Marbella for this recognition and remembered her participation in “La Voz”, the Spanish version of “The Voice” tv show.

“I am really grateful for that show, “La Voz” because in some way it confirms that sacrifice and dedication through so many years can arrive at a good port”.

“I recall” she said “Starting from the bottom, from singing in a Piano Bar of Puerto Banus, and it is thanks to you, to so many people who are here tonight and others who aren’t present that I was able to grow, step by step here in Marbella which I consider my second home”

During this night many people meet and many prizes were awarded, but it highlighted the affinity that the honorees of an important honourable mention of this year, the famous authors behind the signature Victorio and Lucchino had towards the Latin singer.

On the honorary section of the event, the prestigious designers and famous couple Victorio & Lucchino were honoured with the Lifetime Achievement Award in recognition for their impeccable trajectory in the world of fashion which started in the early 70’s and stands tall today extending beyond to jewelry, perfumes and even collaboration on theater and artistic costumes and the decoration design of the Hotel Puerta America in Madrid.

This way, the unstoppable and versatile designers of the most emblematic Andalucía brand José Víctor Rodríguez Caro and José Luis Medina del Corral received this award, for more than 40 years of hard work and impeccable artistic results while they spend the night with this beautiful singer in what could develop to a professional association and a caring friendship.

Following up, a special award was given in the name of Spanish Academy of Radio to the most elegant singer, a recognition which lies in the hands of Yanela Brooks.

Spanish Academy of Radio to the most elegant singer: Special Award that remains in the hands of Yanela Brooks at Spanish Luxury Awards 2017 at Palacio De Congresos de Marbella

Yanela Brooks, Our biggest star from Marbella and now recognized worldwide, received this Award at the by luxury international awards from the SPANISH RADIO ACADEMY for the magnificent work put to her musical album "Boleros Nostalgia y Algo Mas" released on 2015 and which is considered the top album of her career as a composer, singer, pianist and arranger so far.

As a part of this Luxury Advertising Awards gala, Yanela was also singing 2 songs from her albums  #Cubanosporelmundo #bolerosnostalgiayalgomas

Later on, she had a spectacular showoff at the Spanish version of the show “The Voice” taped as “La Voz” which rocket-launched her career opening a lot of well-earned doors to her talent.

Make sure to follow her on her social media and visit her site to get news and music:

Victorio & Lucchino is a Spanish design duo, combining the talents of the founding partners, José Victor Rodríguez Caro and José Luis Medina del Corral who met professionally for the first time at the design department of the Disart Company of Sevilla during the late 70’s.

Caro comes from Palma Del Rio in Córdoba and was born during the early 1950s. He was originally inspired by Parisian designers of the decade who dominated the pages of Spanish fashion magazines. The pair decided to join forces and create their own line, "Victorio & Lucchino."

The Victorio & Lucchino style is purely Spanish in its origin. Their designs are particularly inspired by the spirit of Andalucía in the southern region of Spain where the team lives and work. Taking bright lights to create very rich shadows, colours and textures, awakening the senses to the tastes, touches, and smells that stimulate excitement with their design.

The Victorio & Lucchino design label has succeeded to extend through all Europe, Hong Kong, Japan, Kuwait, and the United States.

Finally, the event was organized by Mundo Ciudad Foundation, with María Cansino as chairman with the purpose of promoting the growth of quality marketing in the country, and for this by delivering to the winning luxury marketing design agencies a total of 200,000€ in training grants boosting their growth as a social activity.

BE SEEN BE VISIBLE! I-Marbella.com

Be part of Marbella present, past and future!

Check out our video of the event and don´t miss the Yanela Brook’s emotive speech upon receiving her award.

Make sure to subscribe to our YouTube channel and stay updated with the best videos, interviews, and information about the city of Marbella and all Costa del Sol!