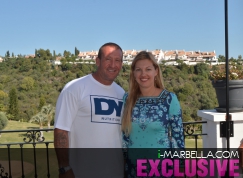 Monte Paraiso Country Club is a unique concept in fitness and health; a fully-equipped fitness centre, with a golf course, beauty salon, and restaurant in the same location.

Yates won the Mr. Olympia title six consecutive times and holds the fourth highest number of Mr. Olympia awards of all time. Yates's professional record consists of 15 major contest wins and two second-place finishes.  Yates espoused a style of training known as HIT, High Intensity Training, which maintains that maximum muscle stimulation can be reached through short, high-intensity workout sessions rather than long duration workouts. Yates earned the nickname of The Shadow for his tendency unexpectedly to appear at major bodybuilding contests and win, despite having remained out of the public eye for long periods beforehand.

In recent years, Yates has conducted several seminar tours internationally to discuss nutrition and his experiences in bodybuilding. He offers training videos and written commentary on his official website.