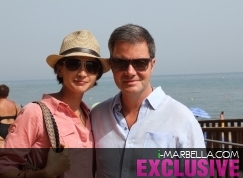 
i-Marbella met the famous fashion designer Javier Larrainzar, who is currently enjoying life in Marbella, doing padel surf and relaxing with his girlfriend Delfo Arnoldi after a stressful life in the fashion industry.

Born in Madrid, Larrainzar spent his childhood between Spain and Germany. He inherited his father’s passion for fashion, and the commitment and effort he applied to every creation, but he nevertheless developed his own personal design style. After training in Italy and the United States he moved to New York to work for three years with renowned designer Oscar de la Renta. There he worked on the design of the collections and organised the Spanish-American designer’s first four fashion shows in Paris.

Javier Larrainzar returned to Madrid in 1992 and opened his own haute couture studio. Larrainzar works personally on the design, marketing and business sides of his company. He does not restrict his scope of action to fashion collections. He has diversified and extended his product line, making a first foray into the world of wine with the limited edition Javier Larrainzar for Heredad de Baroja-Reserva 1998. He also designed his first sunglasses collection which was unveiled at the ExpoÓptica optometry exhibition and in every Cibeles Fashion Week since February 2003. Since September 2008, he has been collaborating with Sun Planet for a new collection of sunglasses. Another of Javier's passions is interior design, which has led to a number of projects such as his collaboration with Javier Duarte since 2006 in furniture design and the presentation in the same year of his first homeware collection, Larrainzar Casa, at the Casa-Pasarela trade fair. Following various prêt-à-porter collections, the brand has gone one step further by designing a prêt á porter Bridal Collection for the Puerta de Europa 2007-2008 catwalk show. In 2008, he continued his expansion with the launch of Larrainzar Kids, a collection of children’s pyjamas for Spanish department store El Corte Inglés.

i-Marbella met the fabulous designer in Marbella next to Victor's Beach, where he is practising his new hobby - padel surfing! Javier Larrainzar (43) has been residing on the coast since December with his girlfriend Delfo Arnoldi(27) and is enjoying life to its fullest. But he hasn't completely left his biggest passion - designing. "I'm currently working on a boutique hotel, designing the interior and every single detail of it," he says. He is hoping to finish it by next year already. Talking about Marbella, he only has good things to say. "I love Marbella a lot. And after leaving the stressful life in the fashion industry, it's the best place to live, not only to visit. You have everything here that you could possibly need - the perfect weather and nice people. To me it's the most interesting city in Spain at the moment," explains Larrainzar.

Blues, Country and Soul in Sylt Beachclub this Saturday