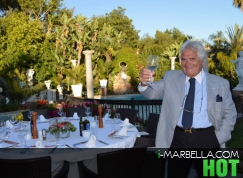 
One of Spain's most well known restaurateurs, Sandro Morelli came to Marbella from London 20 years ago, having cut his culinary teeth at both the Ritz and Cavendish Hotels in London, before opening what would become two legendary restaurants, Barbarella I and II. Patronised by the Who's Who of international society, they were literally the talk of the town.

The reason Sandro decided to leave England was the climate, the cold, grey winters and, at times, almost non-existent summers. Originally he thought of opening a restaurant in Newport Beach with his brothers Raffaele and Vittorio, but a chance vacation in Marbella, then a small but nevertheless enchanting town, convinced him that Southern Spain was the place to be. As a cosmopolitan enclave and the gem in Andalucía's crown, Marbella offered everything he was looking for: almost constant blue skies, quality of life and a sophisticated clientele who appreciated his stylish way of doing business.

As luck would have it, he found an ideal spot for a restaurant on Marbella's prestigious Golden Mile, just a few minutes' walk away from The Marbella Club. When he bought the rundown old villa, it nestled in endless acres of weeds, but after a year of renovations the large restaurant was ready.

Known for its exquisite gardens - which have won the coveted Best Garden on the Coast 2006 Award - Villa Tiberio, under Sandro's guidance, also became a legend, a heavenly restaurant where diners could find themselves sitting next to the late Prince Rainier of Monaco, Sean Connery, Formula 1 mogul Eddie Jordan, Charlton Heston as well as corporate titans and many of the great names of show business.

Sandro's two sons, Carlo and Marco, have also followed in his footsteps and run the very successful Aretusa Restaurant on the First Quay at Puerto Banús. When Sandro is not greeting guests at his eponymous establishment, one of his greatest passions is architecture and interior design.

(Next to Marbella Club), Marbella, Spain

Join us for the Fundraising Gala Dinner in aid of Children with Cancer in the UK @ Marbella, June 3, 2018