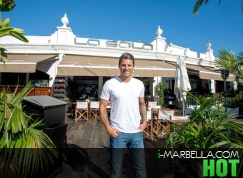 
Ex-England winger quit in June at age 29 saying a 'robotic' culture made him fall out of love with the game and now co-owns a restaurant in Marbella.

After the success of his investment in Marbella with the La Sala founders, business associate Ian Radford and football agent Rob Segal, Bentley has invested in the new UK-based La Sala Ltd.

The scene begs one question: "Where did it all go wrong?"

Yet many would argue that things really have gone wrong for ex-winger Bentley.

A decade ago he was tipped to be football's next big thing as he rose through the ranks at Arsenal, but this summer, aged 29, he retired without fanfare after ­failing to hit the heights he was ­supposed to reach.

He made one appearance for the Gunners before forcing through a move to Blackburn – where he had been on loan – at the age of 22.

Two years later he was an England international – he won nine caps in total – and Tottenham had paid £15 million to take him back to north London.

Bentley signed a five-year deal at White Hart Lane but his career stalled under Harry Redknapp and by the time his contract ran out, following loans to Birmingham, West Ham, FC Rostov in Russia and Blackburn, he had made just 42 appearances for the club.

By his own admission, the further he went in the game the more disillusioned he grew and when that contract expired he slipped away for good.

He added: "The future doesn't worry me. I've always been like: "Whatever is five feet in front of me is what I deal with at the time."

"One of the main reasons for the move was that I wanted my kids to be bilingual – it's very multi-cultural.

"It's a privilege now to wake up and do what I want, and take nothing away from football, this is what it has provided me.

An eventful summer at Buddha Beach (4)