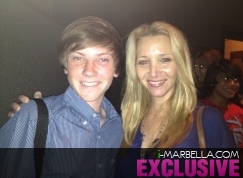 Viktor with Lisa Kudrow from Friends


Natasha Romanov's son Viktor Zelikov has been interested in movies from a young age and now he got the chance to take a course in the New York Film Academy in Los Angeles! Viktor was kind enough to share his experience in the states with i-Marbella!

"The New York Film Academy in Los Angeles was my summer revolution - film making from casting, writing and editing to directing your own movie was the fundamental education but the three weeks were so intense and fun.

Oakwood was a residential campus for the students, in the heart of the massive Universal Studios site. My 15 classmates and I could fall out of bed and be on the set for shooting within minutes. One of my classmates was the son of Lisa Kudrow. I met her and had my photo taken with her. I was surprised at what a quiet person she was off the set of "Friends".


The lessons were super intense but really interesting. The teachers for all parts of the course were very relaxed, funny, cool, nice and very experienced in the world of film. They were surprised on the first day at how shy we were and encouraged us to let our hair down - we were allowed to drink and walk around in class and to take breaks when we wanted to. Nobody did because the sessions were so interesting and the teachers, very charismatic. I have never learned so much. At the end of each day I had a headache from all the input. The goal was to make a short silent two-minute movie. At first it seemed really hard to come up with ideas that would fit the criteria. But after a lot of brainstorming together, we had more ideas than we could possibly use. Each one of us could choose our own technical crew for making our movies from our classmates. We had a Director, Director Of Photography, Assistant Camera and Gaffer. I came up with many short movie ideas and most of them were romantic but boring. So, for my two short silent movies I added a small twist at the end, to make them funny and interesting. You can watch them on the link below.


We filmed on the sets of Universal Studios - there were perfect replicas of New York, Mexico, Europe, the Western set, Back to the Future set and Pirates of the Caribbean set. We also used the same set as Nicki Minaj's music video "Turn Me On". Many famous movies have been filmed there before and we all felt very privileged. Tourists on trams enjoying their ride round the huge studio site, were much amused by our antics and took photos of us filming.

On the last evening of the course at NYFA after 3 incredible weeks, we screened our movies at Warner Brothers Studios. Parents and friends were invited to the beautiful, old fashioned cinema to see our efforts. We were all racked with nerves as our productions were about to be judged by the audience. I felt immense relief when the audience clapped and laughed and appreciated the humor of my movie. Cole played the really ugly girl and his friends and family could not stop laughing at his hilarious acting and costume.

We also did many afternoon activities such as going to the Universal City Walk (an outdoor shopping mall) where I lost my camera but to cheer me up all of my friends and I started to dance in the middle of the street to "Call Me Maybe". Many tourists came and took pictures with us and joined in - it was lots of fun. We went to a museum which had an incredible view of Los Angeles and an IMAX cinema to watch The Dark Knight Rises. In one scene it was super quiet. There was a huge bug sitting on batman's nose on the screen. It was so hilarious that we had to leave the room. Santa Monica beach (famous beach in LA) was where we all got our fortunes told for 5$ - very cheap - I´m apparently not creative at all and will be a lawyer in the future! (I have no interest in maths!) When my friends and I compared notes about the palm reading, it turns out we´re all gonna be lawyers! I guess you get what you pay for!! We also had a private screening of a new movie called "Pitch Perfect". It's a musical comedy. I would recommend seeing it when it comes out. It was great. A high point was our trip to Magic Mountain where there are the most heart thudding rides in the world! We went on a roller coaster where we were upside down most of the time. They take photos of every ride afterwards and I looked like an alien about to meet it's maker and my face had gone a pale shade of green. I'll never forget it.


This course has been a pivotal experience in my life. Not only have I learned so much but I've gained a huge amount of confidence and found new friends with the same objectives in their lives - to learn how to express our creativity through film. This common bond was there when we all met and we were strangers at the beginning of the course and at the end we became a family of like-minded individuals, none of whom wanted to go back home. Hopefully, when we start in the film industry, we'll meet again and make our movies together. I still keep in touch with my new friends every day.

Meanwhile when the kids were in the different parts of the world, Natasha with her group Gitano were working hard on their new project with Cafe del Mar in Ibiza."