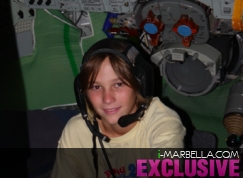 
It wasn't so long ago when we wrote about one of the sons of the singer Natasha Romanov named Viktor and his adventures in Los Angeles where he was studying in the New York Film Academy. And now its Alex's(11 years old) turn, he is just as talented as Viktor! He went Space Training in Moscow to become an astronaut! Read about the experience below:

This summer I had an amazing experience. I visited Star City near Moscow to participate in space training with my father and some friends. The Centre is used for the training for Russian astronauts including the first man to orbit earth, Yuri Gargarin, and my friends and I were the first children ever allowed to spend 5 days training as though we were real astronauts preparing for a mission in space.

My favorite activity was underwater diving and maneuvering inside the space module which was submerged in 8 meters of water. This resembles being in space because the water makes you virtually weightless and is pretty close to floating as you would in outer space. We were warned about hitting our heads because there was limited space inside the capsule. My friends and I were already experienced scuba divers so it wash´t too frightening.


The astronauts told us they were taught to keep calm and work together at all times, especially in stressful situations in space. We had to do various things that real astronauts would do on a mission in space. We opened the capsule door which was quite complicated, we took equipment out and clipped ourselves onto the outside of the module (for safety in space), we fixed a satellite on the exterior of the module and were occupied for about half an hour under water.


We simulated floating in space by lying in a aerodynamic tube that pumped air through a huge fan under us. The wind was 140 kilometers per hour and it lifted us up into the air. We spread-eagled our arms and legs to balance and to avoid being thrown into the wall. We had to wear helmets, special clothing and goggles for protection. It was a fantastic sensation!

I enjoyed our time at the centre so much that we will go again next year. Maybe one day we will become astronauts and view space without our flippers and goggles!