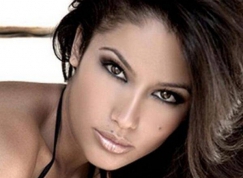 The 24-year-old revealed on Instagram she is in a relationship with singer and DJ Vanesa Cortes.

Miss Spain has revealed she is in a lesbian relationship, becoming the first openly gay national beauty queen. Patricia Yurena, who has won her country's title twice in 2008 and 2013, posted a picture of herself and her girlfriend Vansea Cortes on Instagram, alongside the caption "Romeo and Juliet".

The photo, which shows the couple lying on a bed and looking into one another's eyes, prompted widespread congratulations, and support for her decision to come out publicly.

She later posted a message saying: "Thanks to everyone for their comments.

"I published quite naturally and impulsively. I appreciate the outpouring of support and even more to rejoice in my happiness. Thank you!!"

Miss Yurena, 24, from Tenerife, finished runner up in 2013's Miss Universe competition, while her girlfriend Miss Cortes is a singer and DJ.