Meet the New Stars of Life On Marbs 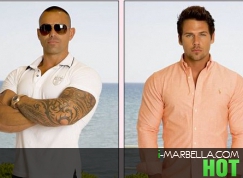 
The TOWIE cast famously go every year, but this is the It-crowd who rule the roost in Marbella. While we're used to seeing the likes of Arg, Gemma and Mario cavorting in the sun for a week or two, the cast of ITV Be's brand new reality show, Life On Marbs, are the real playboys and girls of the Spanish Coast.

Take public school boy Adam Graham, 25, who has been heading to Marbs with his family since he was little -- and he's recently decided to extend his holiday indefinitely, bragging: "Two and a half months ago I came to Marbella for a party, and I still haven't gone home yet."

Club promoter Adam and his brother Jeff, 23, are just some of the larger than life characters that hold the real star power in the Costa del Sol.

While the girls and boys from TOWIE all angle to try and find the best villa's for their annual migration, millionaire businessman Bally Singh, 39, has no need to leave his lavish penthouse in Puerta Banús for a good time -- the eight-bedroom crib boasts its very own night club.

Bally -- who runs The Rich List luxury promotions company -- claims to be friends with the likes of Sting, 50 Cent, and Pharrell Williams, and although he doesn't touch a drop of alcohol, he still insists on cleaning his watches in champagne.

But if these larger than life characters sound ostentatious, then 35-year-old Jon Stretton Knowles knocks them all out of the crystal clear waters.

After retiring in his thirties, Jon now flits away his time spending his vast multi-million pound fortune on everything from £50,000 bar bills to Ferraris.

Speaking to The Mirror, Jon said of his credit card melting-antics: "I spent £85,000 and that was a heavy night in Cannes, but I have also had big days and night at Ocean Club [a local A-list haunt in Marbs], like 40 or 50k days."

Life on Marbs Premiered on ITVBe

Jon Stretton-Knowles Is a Lucky Dog!