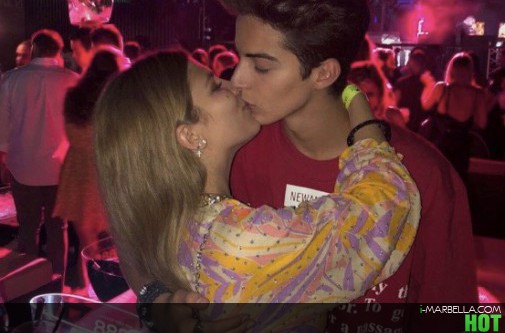 
Marbella's new influencer Salman Yousra who is a young man of only 17 years, born in Marbella has shared an exclusive photo with us from Starlife Festival 2018 of the couple kissing passionately at Disco Dreamers Marbella. The model has embarked on a hot new romance with a student from Madrid, Carolina Molina Ortega.

Salman is a Spanish model, singer, actor, and influencer based in Marbella who has earned over 150K Instagram followers. He started modeling at 15 years old and quickly gained popularity.

As we have lately seen through his social media channels, media, and photographies, he's currently holding a relationship with Carolina Molina Ortega a student from Madrid. As demonstrated in several photos of the couple it seems like they had held a romance throughout the past months but thus far nothing has been confirmed.

The couple has been spotted going together to the Starlite Festival 2018, where multiple occasions at night they've got caught kissing each other.

Apart from the photos, it's very likely that the couple holds a dating relationship, after confessing it on their social networks with a beautiful quoting dedication to their followers for finding love and happiness.

We were able to filter some photos from the popular Starlite Festival 2018 in Marbella at the Juan Magan concert where they posted a picture of themselves kissing, and also a few days ago at the Jason Derulo concert in Marbella at the disco dreamers.

According to our source, they met first in July 2017 (Carolina's Instagram bio message XXVll) and just one year after, specifically on July 27, 2018, the couple started dating together.

In recent days, Salman Yousra has been an active attendant of the Starlite where he was invited by the official organizer Sandra García-San Juan.

The photo was taken a few moments before the beginning of Starlite Festival 2018 in Marbella with Juan Magán a Spanish producer, singer, remixer and DJ of electronic dance music, recognized internationally for his contributions to the "Electro Latino" category of music.

Salman Yousra (17) was born in 1999, in Marbella, Spain, He has recently become a popular influencer who started his career randomly with only 15 years when he got into social media sharing photos on his own. With the time, after sharing constantly his life, step by step, he got to the point of getting more visibility and impact, thus increasing his Insta followers.

After achieving great popularity, he started to work as a model and national magazines or firms got very interested in him. In such a short time he has achieved a number of fans in Spain that is incredible without having been in any TV source. He is currently working as a model, Singer and is going out in a series of Mediaset.

He has attended events such as Starlite Gala, Marbella Film Festival, and Fitur, as well as the Mercedes-Benz Fashion Week in Madrid along with other important personalities in the front row of the runway. In addition, he has worked as a model in brand image campaigns, among others, such as Balr, Levis, Pepe Jeans, and Paul Hewitt Watches.

You can check out his personal links below:

1st Edition of the Film Festival in Puerto Banus, Marbella 2017 (1)