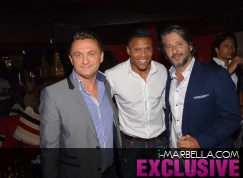 The footballer Júlio Baptista is nicknamed as "The Beast" due to his physique. sBaptista began his career as a defensive midfielder, and after a series of impressive performances for his home town squad São Paulo FC, Baptista signed for Sevilla FC in 2003. Upon signing for Sevilla, he was converted into a forward, and in his two seasons, he scored 50 goals, leading to his 2005 transfer to Spanish giants Real Madrid. After two unsuccessful seasons at Real Madrid with a loan spell at Arsenal sandwiched in between, Baptista transferred to Roma in Italy. On 3 January 2011, Baptista completed a move to Spanish club Málaga, signing on a three-and-a-half-year deal.

On 24 July 2013, Júlio Baptista signed with the Brazilian first division club Cruzeiro Esporte Clube, where he was teamed up with well-known names such as Dedé, Dagoberto, and Fábio. He was reported to be on a 2-year contract, with a reportedly €170,000 per month salary. On July 28, 2013, Baptista went to the Mineirão Stadium in an armored car, and was presented to Celeste fans in the club's 4-1 victory against rivals Atlético-MG.[16] After his presentation, Baptista did not confirm when he could debut for his new club. According to La Bestia, it depended on "documentation and of Marcelo Oliveira (Cruzeiro's coach)".

Júlio was spotted in the hottest place in Marbella - Suite Restaurant & Lounge, Hotel Puente Romano on a Friday night. He was having a fun night out with his friends, amongst them was also Mario Guarnieri from Guarnieri Concesionarios.

10 Minutes with the inimitable Charlotte Fisher… (7)

The Suite, "Prince of Clubs" Celebrates Seven Years of Success with a Purple Rain Party