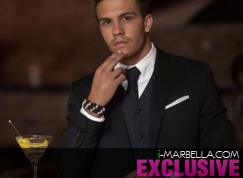 Alongside being a high-profile socialite on the nightlife scene of Marbella, football addict, gym enthusiast, and an all-round-fun-loving guy with a big circle of friends, José has recently become the new face of one of the newest designer jewellery, Christian-Rex, quickly becoming one of the biggest lines. Since joining the company, José has massively helped showcase their innovative and unique designs through a series of photoshoots and international jewellery exhibitions, not only boosting the profile of Christian-Rex, but also his own portfolio. José has now been approached by various modelling agencies and started a fast-growing career as an official agency-signed model. José is thrilled about how far he has come. Maintaining a humble reputation on the path to success is what makes him the man he has set out to be today.

Christian Rex and José Garcia (Instagram&Twitter @JoseGf13), model and Christian's business partner, were at the 39th annual Toronto International Film Festival that was held on September 4-14, 2014.

During the stay, the model and Christian’s business partner, José Garcia   (Instagram&Twitter @JoseGf13), was very busy talking to different media and press representatives and also had several photo shoots. José is also the image of Christian-Rex. I must say that when I chose him I selected the right person for this job, since everybody loves him! – he adds.

How to spot a fake designer handbag?