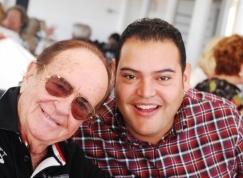 José Luis Uribarri (August 9, 1936 – July 23, 2012) was a Spanish television presenter and director for TVE. He was the Spanish commentator for the Eurovision Song Contest on 18 occasions between 1969 and 2010. He was widely known as 'La voz de Eurovisión', 'The Voice of Eurovision' in Spain.

In 1968, Spain won their first Eurovision Song Contest in London with Massiel and La, la, la, which meant Spain would host the 1969 Contest, regular Spanish Commentator back then was Federico Gallo but TVE decided to dismiss him from the Contest and selected Uribarri to commentate on the Contest. Uribarri returned to commentate again at the 1970 Contest and again between the 1974 Contest and the 1976 Contest, Uribarri did not return to commentate between 1977 and 1991, but made a return as commentator at the 1992 Contest and continued to commentate for Spain until the 2003 Contest, he was regarded as the voice of Eurovision. He made a return again for the 2008 Contest and again for the 2010 Contest. Other than the Contest itself, Uribarri presented the Spanish National Final Pasaporte a Dublín for the 1971 Contest, he also made appearances as a member of the Spanish jury for the national finals. In 2009 he headed the Spanish jury at Eurovisión 2009: El retorno.

It was confirmed on 8 February 2011 that Uribarri would not return to commentate on Spain for the 2011 Contest, Uribarri announced it on the Spanish section of Digital journalist, Uribarri also stated that he wanted to work on other projects for the newest television station 13 TV. It was announced on 2 March of that year that José María Íñigo would fulfill the role as Spanish commentator. In November 2010 Uribarri began working for 13 TV and began working on a shows called Nuestro Cine which was dedicated to the Catholic Church, he took a break in 2012 from television.


He loved Marbella a lot and he spent many summers here. Jose was a close friend of the producer Felix Ramos and he participated in several programs. The last event in Marbella, was the circle in the Pappardella of Puerto Banus, where people could enjoy him talking about his work experiences and career over the years. THE last award he received was Cofrade Prize 2012, awarded by COPE Marbella, at a gala attended by Antonio Banderas, The Duchess of Alba or Arturo Fernandez and many others.

Our sincere condolences to his family, especially to her youngest daughter Laura, with whom he had a special relationship and who worked on his last program had "Our Films" Channel 13TV. Rest in Peace.