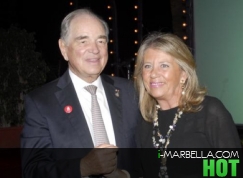 
Count Rudi, one of the most important figures in the Marbella community and the “soul of the Marbella Club hotel”, celebrated his 80th birthday on the 25th of September surrounded by over 300 glamorous guests.

The day began with the Marbella Town Hall dedicating a star to him on Marbella’s answer to Los Angeles’ Walk of Fame - Bulevar de la Fama. He now sits alongside luminaries such as Julio Iglesias, Montserrat Caballé and The Duchess of Alba. At the ceremony Marbella’s Mayor, Angeles Muñoz, personally thanked the Count for his invaluable support and his contributions to all aspects of life in Marbella, calling him the “dynamic and hospitable” face of Marbella.

After a family lunch he attended a Thanksgiving Service in Marbella’s main church Iglesia de Nuestra Señora de la Encarnación where over 200 people celebrated his long and full life. The service featured a wonderful performance of baroque music by the Colegium Musicum Orchestra and Count Rudi was presented with a personal birthday wish from the Vatican, which brought him and many in the congregation to tears.

This magical day concluded with a cocktail reception at Marbella Club’s Villa del Mar with over 300 people in attendance. Guests were greeted by local police officers on horseback and welcomed by the brass band from La Pollinica. After a beautiful rendition of “Happy Birthday” in Spanish, German and English by pupils of the German School of Marbella, many people stood up to give speeches in his honour.

Managing Director of the Marbella Club Hotel Group, Shaun Leleu, commented “I don’t think any of us here know any better host in any hotel in the world than Count Rudi. Rudi you epitomize hospitality and everything which is good in this industry” and his son Friedrich described him as “the most happy, content and positive person I have ever met.” Mayor of Marbella Angeles Muñoz, summed up the mood by saying “Count Rudi is the essence of what is the best about Marbella.”

As part of the celebrations he received the Gold Medal for Tourism from Promotur, was made honorary member of the Marbella Rotary Club and presented with a beautiful bunch of 80 red and white Count Rudi roses cultivated especially for him by Nevado Roses. His family and friends all contributed to present him with a gift of three weeks travelling in India with his wife, a lifelong ambition for them both.

Count Rudi ended the speeches by thanking God for 80 wonderful  years and so many blessings, thanking his family and friends for making this birthday so special and the Marbella Club for hosting the marvelous event.

The Beginnings of Marbella Club (605)