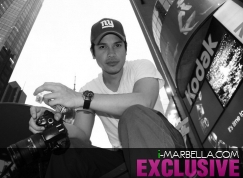 
Timothy used to live in Marbella for 7 years, but then about 10 months ago he moved to Asia, Jakarta, but he promises to be back, since his family has lived in Marbella for about 40 years now. That's why he calls Marbella his home! Timothy and his group 8six Studios designed a new iphone app, Plannerd, that took him 14 months!

Plannerd is a new All-In-One Personal Organizer App full of Awesome features. The idea is that you feel like you have an actual classic Personal Organizer in your hands, but in digital form. Users, or as we like to call them: Plannerds, can swipe to the left or to the right and quickly access the many features of the App.

2. What makes Plannerd different than other To-Do, Notes, or Organizer App out there?

We believe we have developed an app that not only offers many great productivity features to organize your life but it does so with eye-catching graphics, flawless functionality and all in ONE place. We like other apps, we just love ours better. ;)

Lots and lots of features you will find very useful in your daily life combined with incredibly cool graphics and with LOADS OF CUSTOMIZABLE options.

4. Where did you get the idea?

I conceived the idea for Plannerd in Marbella a little over a year ago. I got really excited about it because i have always been a "techie" and a "nerd" deep down inside and followed my passion for the field to further develop the Plannerd app idea and thus started to refine the concept more and more. The idea came to me that there were no Planner or Personal Organizer apps on the App Store that resembled the Classic bound Filofax-type Organizer we all used to have before everything went digital... i remember i loved the feel of that organizer in my hand and practically took it with everywhere...but it got so heavier all the time and even messy very often that i frequently just opted to leave it at home and used my mobile phone to make quick notes....and so i started developing the Planner/ Personal Organizer concept into an iPhone app and a year later, Voila!, ...Plannerd was born on March 15th, 2012 on the App Store. Now, i have the look and feel of the real deal personal organizer i used to lug around but without the messy torn papers and all in digital form on my iPhone! :)

The development of Plannerd took about 14months of hard work, meticulous design and coding. My team of 3 (One Graphic Designer, One Programmer, and myself in founding the Concept as well as design) made up the App Studio (8six Studios) responsible for Plannerd, We are a solid team that see the same visions for Mobile Apps and the way it will play an even bigger part of our lives more and more each day.

6. Can anybody design an app for iphone?

Anybody can design an app if they wanted to. All it takes is a little elbow grease and jug of hot coffee to keep you up. A great app starts with an idea and then finding the right set of people to develop that idea. There are alot of talented developers out there and the App Market is vastly becoming a very competitive one.

7. What is your next project?

We, 8six Studios, are already working on the next projects. Namely Plannerd HD for iPad as well as developing a Game for both the iPhone and iPad. It will be awesome, so stay tuned!