Málaga singer picks up three nominations in the Latin Grammys 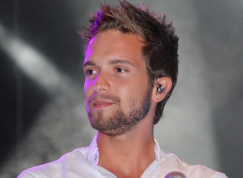 
Pablo Alborán is nominated for the best song of the year.

Málaga Singer, Pablo Alborán, who had a surprise number one album in Spain this year has been nominated in three categories of the Latin Grammys, including best new comer and song of the year for ‘Solamente tu’.

When he heard the news the Málaga singer wrote on Twitter – ‘Family, I don’t know what to say. This is a dream, I love you!’. Shakira, Ricky Martin and Maná also have three nominations this year.

Grand favourites at the Latin Grammys this year are Calle 13, a due from Puerto Rico who have as many as ten nominations.

The ceremony will be held in Las Vegas on November 10.

See the gallery of his concert this summer on Costa del Sol HERE!