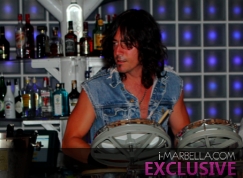 
Stefano Cestra is a drummer, percussionist, music writer and producer, who originally comes from Italy, but he will be the entertainer in Suite del Mar for the summer.

Stefano has a degree at the Music Academy of Florence, Diploma Degree at Drumtech (Drum&Percussion School of London). He started as a drummer in two well known bands in Florence, Italy, then moved to London in 1998 to pursue his diploma/degree in drums and percussion at the Drumtech; Bosco De Oliveira, Paul Elliot and Brian Green are among the highly internationally renowned musicians/teachers Stefano had the opportunity to learn the art of drumming from.

After his graduation Stefano joined the rock scene in a band where he played the drums and co-wrote music for about two years. Shortly after, Stefano was invited by the Greek icon Anna Vissi to tour in Greece. Back in London he started performing as percussionist in clubs where he had the opportunity to meet several worldwide  artists (and to play for most of them in their private events), including: Sting, Lenny Kravitz, Roger Taylor (Duran Duran), Cyndy Blackman, Chris Cornell, Bon Jovi, Tommy Lee, Matt Sorum, Brian Adams, The Prodigy and Mike Champion, Pink, Justin Timberlake, Danny Minogue, Faithless, Erick Morillo, and many others.

Stefano then performed with jazz star Kyle Eastwood (thanks to a meeting with producer Michael Stevens) as well with drums masters Ralph Salmins and Mark Mondesir, with Dave O'Higgins, Graeme Flowers etc. Stefano has worked as percussionist in private functions like the prestigious Chinawhite "Rock The Polo Cartier" in Windsor, events at Chelsea stadium for the Champions league or for F1 star Jenson Button and in the most popular London nightclubs (Chinawhite, The Cuckoo Club, Aura, Crystal, Jalouse, Raffles, Umbaba, Boujis, Kingly Club, Cafe de Paris, Prive,.... and abroad:  New York (The Rainbow Room) ,  Monte Carlo,( La Salle Des Etoiles ),  Marbella, (Suite del mar, Ocean Club), Italy,  Stockholm, (Cafe Opera, Laroy, Spy Bar,etc..), Gotland (Burmeister) Athens (Fever),, Dublin (the Four Seasons Hotel), Latvia Riga, etc. At the same time he is working on the production of his rock album. Stefano Cestra is recognised as a complete and reliable artist thanks to his versatility to be able to play many different styles of music from rock to jazz,dance to R'n'B and hip hop.

1. How old were you when you started to play? Why did you choose the drums?

Well I started to play when I was very young but not the drums!! I was only 9 years old when my sister was taking piano lessons and I remember that I got attracted by its deep and complete sound. For that reason, a little later, I tried to play it myself. I started to combine bass lines with high singing notes and I suddenly realised that I could recreate songs that I was familiar with and I loved it. It was only a few years later, that my passion for drums took over and I have to say that it could well be thanks to my sister and her piano that I've become what I am now.

I could say that I didn't choose the drums, in a way the drums chose me! In facts, I've always been inspired by rhythm, since I was a child, it just was in me - a part of me.

2. Did you always know what you want to do? When did you discover the passion for music?

I always knew I could have been a musician, however, before my graduation at the Accademia Musicale Fiorentina in Florence (drums and jazz piano) and at the Drumtech in London, I studied architecture, which is actually another form of artistic expression. But then I decided that I would make my career in music. I discovered music, when I was a child. Thanks to my father, there's always been music in my house. I found music a very natural feeling, a satisfying untouchable reality. Isn't that incredible that one of the most powerful forces in nature capable of unifying people is an intangible sound wave?

3. Why did you decide to move to London? In what way did London help to boost your career?

I decided to move to London to study drums and percussions to a higher level.  London definitely helped me in boost my career because it is undoubtedly the European capital of music. It is there that the best and most influential artists in the world can be found and you have the chance to meet them too. It's there that you will have more chance to express your musical talent and most of all, more chances to be heard. There are so many unbelievable musicians out there, around the globe, that simply don't have the chance to express their talents.

4. We also heard you met many famous people in London? How and why?

I usually had the chance to meet famous artists when I'm performing, either in normal gigs or in private events, but mostly at private events. Private functions are a great opportunity to chat and exchange experiences at a more personal level.

5. Which is the biggest gig you have had?

Well I had many memorable gigs. I remember one of the most enjoyable, in terms of big club dance vibes, was probably at Chinawhite "Rock the Polo" Cartier when Erick Morillo was at the decks on a higher stage behind me and thousands of people where dancing in front of me. That was rock'n'roll!

The gig I played together with my dear friend Roger Taylor (Duran Duran) for his birthday party was remarkable too! It was great and a classy atmosphere..

The finest gigs I've played so far must have been with Kyle Eastwood Jazz band though. I learned a lot from them, where I performed next to incredible musicians, among the best in the world. Among the big gigs I had are the ones when I was playing with the Greek icon and great singer Anna Vissi, that opened my mind to the rhythms of the Greek tradition and its Arabic influences.

6. How do you differ from other drummers?

It is hard to say exactly in what way I differ.  What I can say is that every drummer/musician/artist differs from one another and has different natural skills. For example, in music,  the performance of a drum pattern or a guitar riff, seems impossible for someone to perform but it will be very easy to accomplish for someone else.

Natural skills help to choose and develop someone's artistic path and consequently, make you different, sometimes unique. Try to find them in your soul and follow them. Personally, I think I have always had a good ear for music and I can detect the essence of many different styles of rhythm and dive into them, explore them and experiment with them, and that is probably where I differ. Ah, I almost forgot - I like to rock the place, but I mean really, really rock the place :)

7. What do you consider to be your biggest accomplishment so far?

My biggest accomplishment so far, apart from the live gig scene, is actually not been completely achieved yet and it's the recording of my rock tracks of which, although it's still ongoing, I'm already very pleased - they sound good! I'm planning to release them next year and I'm about to form a band to rock out them live!

8. What are your ambitions as a musician?

My ambitions as a musician right now are all just gathered in one - my album! I hope you will check it out!

9. Do you have an idol? Who do you dream of working with?

John Bonham! I would have loved to meet him, but, God bless his soul, it's too late! He inspired me so much! Would love to work with the remaining three of the burning Zeppelin though - Robert Plant, Jimmy Page and John Paul Jones. That's a dream...

10. How did you end up in Marbella? Why did you move here?

I was invited by a dear friend of mine to Puente Romano a few years ago to perform at Suite winter for a weekend and since then, I've been in contact with him and we started a great work relationship. That's the reason why I'm here in Marbella this summer too, to perform at Suite del Mar and rock it! Every once in a while I will be performing in other places and occasions too. Anyway come and see me...

11. What do you like about Marbella? How do you spend your free time here?

The Marbella I know is a beautiful cosmopolitan city, very nicely located and a warm place with traditions very similar to mine. Basically a very nice break from the 200km/hour city of London! I love going to the beach! There are no beaches in London!

12. What are your other passions besides music?

I love mountains and everything related to it (skiing, hiking etc..)It boosts up my energy!

13. What are your plans for the summer?

Mainly performing at Suite del Mar and in other events as well!

camomile 11-07-2011 12:28 Bello,cool,sexy,talanted,open,charming person and performer. When I heard his first time I fell in love with his play. I will be the first in a queue to buy his album!!!
0

F.C. 11-07-2011 11:47 Great drummer,listening to him performing,you can appreciate his great talent,his grit,his class and his unquestionable ability to involve the audience.
F.C.
0

Katia Sergeeva 09-07-2011 15:11 I love seeing Stefano perform in London. He has an incredible talent for just making me (and others) dance like its the last time!!! I am actually coming to Marbella next weekend and can't wait to hear him rocking the place!!! Great news about the album too - will definitely check it out!!!!!
0