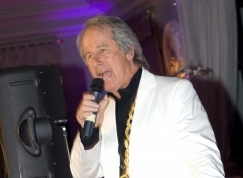 Novelist Lord Jeffrey Archer described Maurice as, "the professional's professional. He is very hard working, very demanding in his research and above all - which is not the case with all journalists - he is very fair. He sees both sides."...

Born in Dublin into a medical family Maurice caught the showbiz bug at a very early age, after running a successful club in Ireland where the rich and famous flocked to, he decided to come to Marbella in the early 80´s and took over James Hunt´s (Formula one racing champion) club, “Oscars”.  In 1986 he opened the Cuba Club on the Golden Mile.

Maurice´s career continued to evolve and he went on to present the first radio show in English on one of Spain’s largest independent Radio stations, the show quickly became a hit amongst ex pats.   Maurice´s Midas touch continued and he initiated H! Society which became the, 'must to be seen in and to be seen with' magazine.  In 2004 Maurice launched his own radio station REMfm (now rebranded as Talk Radio Europe).  TRE is now Spain's largest English speaking radio network broadcasting to listeners along the Costa Del Sol, Costa Blanca, Costa Almeria, Costa Cálida, and Madrid.

Maurice is a great family man, tireless charity worker and well loved member of the community, if you ask Maurice what his hobbies are, he'll laugh at you saying “ when do you think I would have time for a hobby , after all , my work is my hobby”...

1. What is your profession?

2. How long have you been living on the Coast?

3. What brought you to Marbella?

I bought James Hunt’s, the then Formula 1 Champion’s, Club “Oscars”.

4. What do you miss most about living in Ireland?

Ireland and everything about it!

5. Back in the day you were renowned for being Mandy Smith´s agent – how was that?

It’s a long story, she worked for me in a club I had called Cuba. After getting together I signed her to Stock, Aiken and Waterman and the rest as they say is history!!!

6. So what prompted you to set up a radio station here on the Costa del Sol?

I had worked with Onda Cero International and could see the need for a Talk Radio Station, that was almost 6 years ago, since then Talk Radio Europe has become Spain’s largest English speaking radio station.

7. Who is the most interesting person that you have interviewed and why?

Impossible to answer there have just been too man, last weeks interview with Ivor Peril ‘Surviving Auschwitz’ was amazing.

8. Where is your favourite eating place here on the Coast?

9. Where is your favourite hang out / place to be?

10. What was the last sms that you received?

From one of my presenters telling me about a problem at the studio.

11. What book have you got on your bedside table?

Chicken Soup under the Tree by Ivor Perl.

12. What is the most memorable experience / life changing moment that you have ever had?

13. What is the most stupid thing you have ever done?

Too many to mention!

The Fish pie that I had today at lunch in the excellent Passion Cafe.

15. If I was to give you a O/W plane ticket to anywhere, where would you go and what 3 things would you take with you?

Dublin, my wife and my mobile phone.

16. Who would you most like to wake up next to?

19. Have you had plastic surgery?  If so where and if not would you?

I haven’t had surgery but when I get time I’ll have my eyes done and a stab or two of Botox.

20. If you believed in re-incarnation, what would your next life look like?