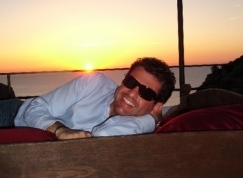 
Brando owns a restaurant and many stores. How does a successful man spend his time on the coast and what are the hot spots at the moment.

2. Where are you coming from originally?

I was born in Parma, Italy, but lived and studied in Rome most of my youth.

3. What is your profession?

I am a businessman. I have an Italian restaurant called  Amore & Fantasia www.amorefantasia.com and also own 3 clothing stores, one of them located in Puerto Banus. One store is temporarily closed for extension and redecoration and will be open to the public by the end of March. Then name of the store goes by my name Brando & Co. The website is ndoandco.com" href="http://www.brandoandco.com" target="_blank">www.brandoandco.com My other store is more like an outlet store and it is situated in the Port of Sotogrande, behind the famous Bar Ke.

4. How long have you lived on the coast?

I have lived here since 1976, when I first came to Marbella with my parents just for a holiday.

5. What brought you to the area?

At first I came here to follow my father, who was in the construction business in 1986. Then I opened the restaurant Amore & Fantasia with an Italian partner in March 1989, but in a few years later I bought him out.

6. What are your hobbies?

My favourite hobbies are music, travelling, going to the cinema, partying and of course cooking.

7. Do you have a favourite area or part of the coast?

Right now my favourite part of the coast is Sotogrande.

8. Do you holiday in other destinations now that you have relocated to a luxury resort?

I like to travel when I can and usually plan my holiday out of season in January. I love to go to hot and sunny destinations, such as Miami, Mexico and generally all the Caribbean. Sometimes during the season I take long weekends and maybe go to Ibiza or if I have less time then Tarifa or Sancti Petri. If I should live somewhere else, I would definately choose Miami.

9. Name a few of your favourite restaurants or cafes here.

I usually don't go out much for dinner, but my favourite restaurants are mainly those which serve good meat, for example El Coto in the Carretera de Ronda, an Argentinian restaurant El Relingue in Sotogrande. And my favourite bar is either New Cafe or El Jardin in Nueva Andalucia.

10. What is good to do in springtime in Marbella?

There are plenty of things to do as long as the sun is shining, for example going out with my boat and spend my day on the sea.