Young people in Andalusia still believe that household chores are the women's domain. 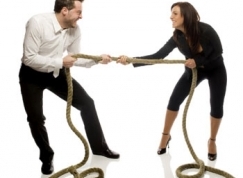 This week The Andalusian Institute for Women introduced it´s First Strategic Plan for the Equality of Women and Men and will invest almost 3,000 million euros in the next four years.

According to the preliminary decision made by the Junta de Andalucía to launch the First Strategic Plan for Equality of Women and Men, young Andalusians under 25 years of age still believe that women are the ones who should deal with all household work. "This is supposedly an educated generation, yet with regards to equality there seems to be little intention of bringing equality into daily life," Soledad Perez, director of the Andalusian Women's Institute commented to Málaga Hoy.

"You're seeing a stagnation in the minds of young people", Perez commented, stating that the most significant advance occurs in those over 65 years. The retired spend time doing work that they have never done in their youth, tasks such as cleaning in the home and caring for children, especially grandchildren. "Girls have entered into the working world while the boys have gotten stuck into assuming the same old roles" the director of AMI added.

Leaving questions of mentality aside, when looking at actual figures, the difference between men and women remains vast. In Andalusia, women are still earning an average of 5,400€ less than their male counterparts, 80% of temporary contracts are for women and seven out of ten businesses in the community are run by men.

These and other indicators have led the Andalusian government to develop an ambitious plan for Equal rights, one that will affect all Councils, and which will invest 2.978 million euros over the next four years.  It was approved on Tuesday at the Governing Council, and on Monday in Málaga, 316 measures to be implemented were presented to "reduce the gender gap and eliminate gender discrimination in employment, educational, cultural and social spheres" said Perez.  Women's associations and social and economic organizations have been involved in developing these measures.

The Strategic Plan in the workplace, strives to increase positive action for the permanent recruitment of women who have left work for maternity or family care in situations of dependency.  Other developments, set out in the plan are to create a benchmark for excellence in equality for those companies developing specific plans. These firms will have preference in being awarded contracts by the Regional Administration.

Nadje 30-06-2012 23:18 I think the women can have her boyfriend/husband help with chores but she will just eventually follow behind him because he didn't do it right. But the equality between the pay of men and women should be the same , it also goes for the man not having to be a virgin but the girl must! in this day and age virginity shouldnt matter but the purity of the heart. i women could have been in love or in a serious and long relationship and they had sex. As, long as her future husbands loves her and knows she hasn't slept with multiple men her being a virgin or not shouldnt matter same goes for the man!
0