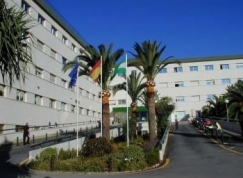 
A Rumanian woman has been arrested for trying kill her partner with a kitchen knife.

A 41 year old Romanian woman has been arrested by the Local Velez-Malaga Police for allegedly trying to kill her partner, a 32 year old man, with an eight inch blade kitchen knife. The incident took place in a house in Calle Bentomiz, the police were alerted by the emergency medical service the 061, according to a statement released yesterday by the Vélez – Malaga town hall.

The wounded man, also of Romanian nationality, reported that the person who had attacked him was his girlfriend and she had tried to stab him while he slept. He told agents that he "sensed someone stealthily approaching him and as he turned he saw that it was his partner who was trying to stab him with a knife”. He immediately raised his hand to defend himself and was injured while securing the knife by the blade, he began to scream and managed to alert his partner´s son and his nephew. The agents arrested the alleged attacker and the injured man was taken to the Regional Hospital of Axarquia.