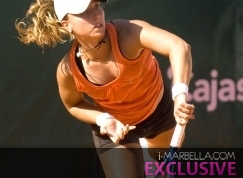 
Marbella, Spain  - Fresh off her big title in Miami, a weary Kim Clijsters came up a stunning second-round loser Thursday at the $220,000 Andalucia Tennis Experience. Garcia Vidagany advanced in 2 hours, 11 minutes, with the help of eight double faults from her Belgian counterpart, who also had her serve broken a whopping nine times.

On Wednesday here, an off Clijsters needed all three sets in order to top 48th-ranked Alexandra Dulgheru of Romania. The 26-year-old Clijsters, seeded third this week, captured the so-called "Fifth Slam" last week in south Florida and is the reigning U.S. Open champ. She beat fellow former world No. 1 Venus Williams in the Miami finale.