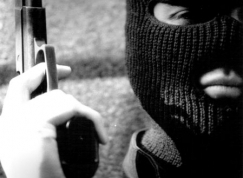 
The employees of a supermarket in Marbella could not believe what they saw, just two days after suffering an armed robbery in which they were menaced with a gun and an iron bar, the robbers entered again, this time as regular customers.

The two young British men, 25 years old, who relied heavily on their masks to try and hide their identity, have paid for their boldness and have been arrested.  According to Diario Sur yesterday, the incident took place on 31 January at 23:00 hours.  Employees of a supermarket in Marbella were surprised by the two individuals who entered the supermarket with their faces masked, brandishing a pistol and an iron bar and intimidating the workers before stealing cash and various electronic devices.

Through the coo peration of a citizen was had carefully studied both individuals when the robbery occurred, the police were able to identify and arrest the pair when they returned to the store as if they were regular customers two days later. Upon searching the home of the detainees, small doses of narcotics and the balaclavas used in the robbery were found. The detainees were transferred to court and continue to be investigated for possible involvement in other crimes on the Costa del Sol.