Thousands of Ex-pats to be potentially affected by the BA Christmas Strike! 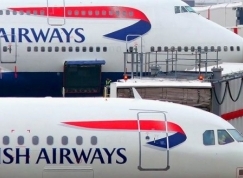 
BA staff are threatening to call a walkout from December 22nd to January 2nd, the walkout would have a disastrous impact on thousands of holiday makers and people going home for the holidays.

BA is taking legal action in attempt to stop the Christmas strikes.  Unite Union shocked the Airline company with their staggering 9 - 1 vote in favour of a walkout in a stance against low pay and working conditions, the strike will have massive ramifications for the airline company and passengers alike.

BA is doing there utmost to help those who are planning to travel for this festive season and announced that the strikes are "completely unjustified".  Willie Walsh, BA´s Chief Executive stated "It is very sad that they are seeking to use the Christmas holiday plans and family reunions of hundreds of thousands of people to try to pursue their case...Unite must understand that there can be no return to the old, inefficient ways if we want to ensure long-term survival in the interests of our customers, shareholders and all our staff.".

Passengers may be affected on the 21st if flight staff are unable to return to their base before the strikes begin.  BA is already losing a staggering £1.6m a day and the strike could potentially cost BA millions of pounds a day on top.