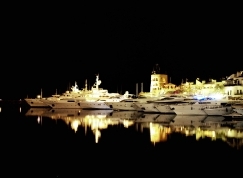 
Piers Morgan in Marbella was unmissable TV and showed many of the reasons why Piers is now one of the rising stars of the medium. During interviews, he has the uncanny quality of piercing the veneer and testing the quality of the material underneath. "How much does it cost to hire you these days?" he brazenly asked Max Clifford (I paraphrase but the meaning was the same). And "Have you managed to put your days as the cad who dated Di behind you?" was the cheeky question posed of James Hewitt (twice!). Both Hewitt and Clifford are ensconced in Marbella millionaire society and visibly squirmed under the Piers torchlight.

Thanks to his days as a probing tabloid editor Piers has no fear of touching on territory others would balk at. He sets out to expose, not illuminate, the character of his interviewees. His starting point is the assumption of "guilty and not likely ever to be proven innocent." In the case of Marbella society, the cradle of crime, this is the perfect approach to take. "Don´t you think charging 16,000 euros for a bottle of champagne just to spray it all over the beach is a bit morally dubious considering the economic recession?" Piers asked a delighted party organiser on the infamous Nikki Beach. "Yes," she replied with admirable honesty. But so what, was the implication throughout the show. If you´ve got it flaunt it, regardless of how you came to have it in the first place.

The Costa del Sol stretches for miles and not so far from the haven of Marbella, which incidentally these days is only a pale shadow of its former self having suffered grossly under the mismanagement of a string of corrupt mayors, you can have a very good night out for 20 euros. Even in Marbella itself there are pockets of value for money entertainment. But the glitterati Piers met do not flinch at a slap up evening costing in the region of 20,000 euros! Piers could afford it, I´m sure, but didn´t look too keen to indulge. He was more interested in putting the hedonists themselves on trial.

The moral question is a real one. Is it okay for certain sections of society to squander wealth in this manner, while the majority of the planet suffers in poverty? Marbella, it seems, lacking the restrained chic of the French Riviera, crystallises this dilemma. This part of Spain is stunningly beautiful and blessed with one of the best climates anywhere, but the reputation of harbouring the twin evils, dole and crime has hampered any real progress culturally. Two years ago, Songs of Praise came down here and showed a different Costa del Sol, one peopled by fun-loving Christians, not gun-toting villains, but unfortunately it's the latter image that persists. The smash and grab culture of a greedy local economy has finally burst with the arrival of recession and a stagnant property market. Perhaps many of the more unscrupulous speculators will now leave. Whether Piers has done us a favour or not with this presentation remains to be seen, but at least it was an honest, if sad, portrayal, of a small part of life here.

Milton Johanides is a retired businessman, church elder, writer and artist. He has been featured on BBC TVs Songs of Praise, owned numerous art galleries and once ran an award winning picture framing business in Scotland. The views expressed in these articles are his own.
email: miltonjohanides@yahoo.co.uk
http://www.helium.com/users/510112/show_articles