The miracle rescue of the missing Dutch tourist in Nerja 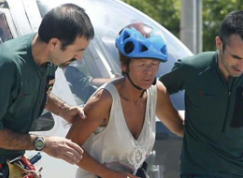 
Many are amazed that the 48 year old survived so well for 18 days in the mountains behind Nerja.

Even the doctors are unable to explain how the 48 year old Dutch woman, Mary Anne Goosens, survived so well trapped for 18 days at 1,500m in the mountains behind Nerja. She suffered high temperatures during the day, while at night at that height temperatures plummeted. She protected herself from the cold at night with leaves and grasses, putting them inside her clothes.

She was found by three walkers on Wednesday morning, and had got trapped in a gully between two waterfalls, managing to drink from falling water. Three students from Málaga, Francisco, Pedro and Daniel, did not even know that a person was missing, but they heard her cries at around 8pm on Tuesday night. They were unable to reach her and left her with a blanket and a sleeping bag, with a chorizo roll, but it was not until the following morning at 8am that they found mobile phone coverage and were able to alert the authorities.

A Guardia Civil helicopter from Granada was scrambled and easily found the spot thanks to the students’ clear directions. The say they had to drill two anchor points in the rock in order to gain access to where she was, but amazingly despite being disorientated Mary-Anne still found the energy to walk, helped by the agents.

Many people are considering her rescue and story to be a miracle, especially after a hospital revision has shown no more than some slight sunburn and scratches on her feet. Her relieved family say the last thing they could imagine would be for her to have headed into the hills alone, as soon as she arrived in Nerja.  El País notes that she told a family friend that she considered eating ants during her ordeal, but was unable to do it.

Mary Anne said she decided to explore the Chillar River, but got disorientated as night fell, and as she tried to make for Frigiliana, fell into the gully and found herself trapped, just 200m from the source of the river. Her children, 29 year old Fritz and 24 year old Jatje described their mother as ‘very strong and intelligent’.